Forty-four years ago I surprised all sorts of people when I joined Tarkio College’s first national fraternal organization.  Yep.  I’m a “frat boy” (and I detest that term).  Everyone who knew me expected me to go through life proudly wearing the letters GDI instead of ASF.  What on Earth ever possessed me to “give up my independence” to become a clone?  I love Townes Van Zandt’s take on fraternity life in “Fraternity Blues,” but it’s simply one parody after another—funny, but not accurate (even though I did have to learn the Greek alphabet in both directions).  So, why did I do it?

My dear Alma Mater was (it closed in 1992, unfortunately) a small liberal arts college in a small town in northwest Missouri only eight miles from where I grew up.  I’m about as “white bread” as a person can get.  Diversity in my life in the late ’60s meant I had a few friends who were Catholic, and they had to go to another town to worship.  My family has always been thirsty for knowledge and our parents taught my brothers and me to be accepting of difference and eager to learn new things and meet new people.  Tarkio College may have been a small place, but it enrolled students from all over the world and all walks of life.  The very first pledge class of the Delta Gamma chapter of Alpha Sigma Phi reflected that variety.  My brothers were different, and we enjoyed the variety. 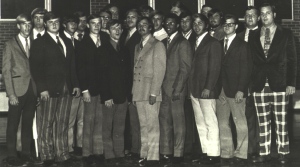 We learned a great deal from one another.  In the two years at TC I had left, I probably learned more from my brothers than I did in class studying sociology, anthropology, art, literature, and the rest of the curriculum.  Yes, we even studied.  I remember my two roommates and I doing that very thing.  One was a music major, the other studied drama, while I applied myself to literature and writing.  It was a terrific room, and students from all over campus visited (for a variety of reasons).  Not everything was in the books we read or the lessons to which we actually did apply ourselves.

Late nights included conversations about race relations.  It was the early ’70s, and things were tense around the country and, at times, in Tarkio.  My Black brothers (true, there weren’t many, but one was more than I had grown up with), helped us to understand the issues about which we otherwise could only read.  The Viet Nam War (OK,

“Conflict”) was at its peak, and some of us were dreading the draft.  Political and religious discussions could be heated, but they were also among friends.  Since we represented a pretty good cross-section of the nation, we learned more about regional differences and similarities than any government class could afford us.  Boxes of “goodies” from home provided us with some tantalizing experiences with a variety of culinary and ethnic adventures.

Like all commencements, each of us began our new lives after graduation and went our separate ways without too much of a look back.  When the college closed, we really lost track.  Even our records went to another institution.  For too many years that part of our lives was lost in starting careers, families, and lives in different parts of the world. Then in 2006 the Internet helped us reconnect.  A few emails among some of us from that first pledge class resulted in a fraternity reunion at the annual Alumni Association gathering.  Although the campus was history in ruins, some of us gathered to reminisce and build on those long-ago relationships.  It was a beautiful thing.

Since then a few of us have maintained those bonds and gather annually on campus.  We are, I am proud to say, part of the nucleus that is rebuilding Tarkio College, as well.  Maybe the institution is not what it once was, but the brotherhood we Alpha Sigs established so many years ago is as strong as ever.

We have lost some in the ensuing years.  One of my roommates, Richard “Guppy” Pugh, a Broadway staple for decades, passed away just a month before our first reunion, but my brother Mike Perry (AKA “Snake”) and I have been canoeing, fly fishing, furniture moving, re-furbishing TC, and supporting one another on a regular basis.  As Facebook “friends,” many of us carry on our political and religious disagreements, inform one another about our regions of the country, share a recipe now and then, rejoice in our accomplishments and those of our children (and grandchildren), and sympathize with our misfortunes.  I have no better friends than those men with whom I shared what were definitely my “formative” years.

What holds us together?  We are brothers.  Yes, it’s corny.  Yes, it’s simply that we have that same badge of belonging among so many others.  But we know that no matter what disagreements or how many miles might separate us, any time we get together again, the years become just a matter of gray hair—if there is any, new wrinkles and aches and pains, and interesting new things to discover about one another.  I have an entire extended family upon whom I can call at any time, and I have done so.  We just pick up where we left off, although it might take a few reminders!

I may belong to several other groups of one kind or another, but only my blood relatives and a very few other friends are as close as that group of men who shared those years and memories with me.  They helped me through college, were part of my wedding entourage, celebrated with me the births of my sons and grandchildren, mourned with me the loss of my wife and parents, and will hobble along with me until the end, I know.  The cause is hidden, but the results well known.

Now I’m going to have dinner with one of my “brothers from another mother.”  I’ll talk with you tomorrow.